as promised we are working on a few tools to simplify the addition of libraries into Flow, because we want it to be as much as possible an open product. In this case data is in maintained in an excel file and the tool generates JSON data for Flow and the Cubase expression maps in XML.

I am happy to share with you a few pictures of the tool that will be in beta testing next week, surely release before end of Month

This is the UI, simply choose the excel file with the data, the folder to export, if want to create also the JSON for Flow or only the XML for cubase and that’s it! 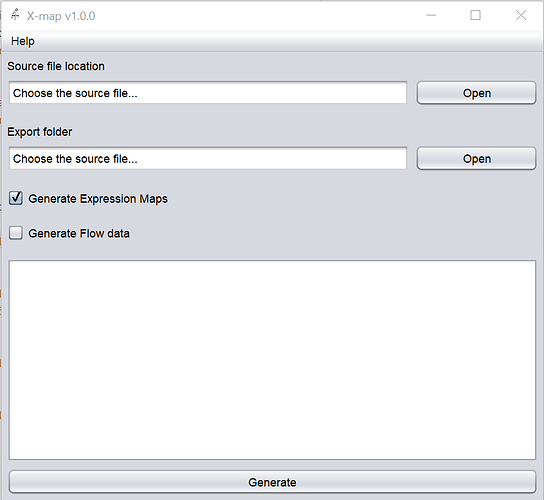 This is the excel tab with all the articulations, I will make available the one of Flow Professional

This is the excel tab with all the expression maps defined 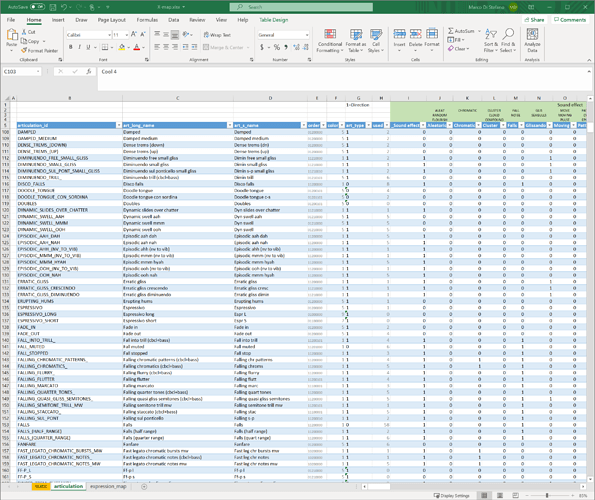 And finally this is the result, thousands of files generated in a few seconds 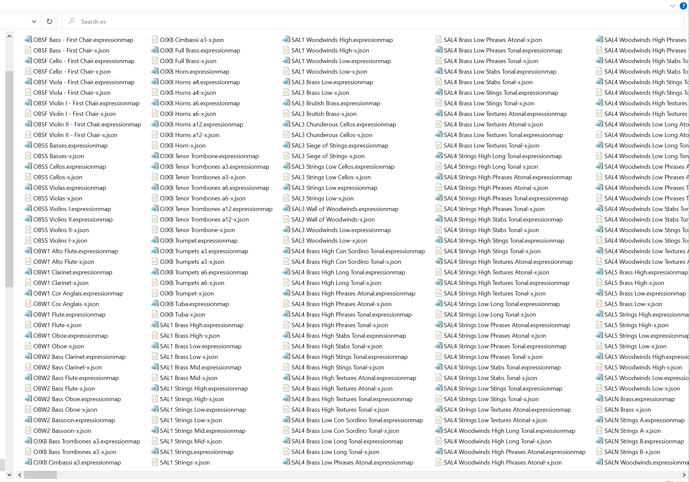 I will make an interesting intro promo for owner of the professional version, will share it as soon as available.

Hi Marco, any news on XMap?

Hi Stepan,
the tool is finished, but I have some issue with building a solid licensing and code obfuscation mechanism cause it is written in Java.
If I don’t do a good solution I give away most of my intellectual property behind Flow, so not easy to decide.
I am afraid this will be in any case postponed to Q3 2021

After going through the procedure for adding a library I can tell you it is a much needed tool for expanding the number of libraries I would add to my template if I had it. Like East West Opus, and a bunch of other Kontakt and Play instruments. Would it be possible to share these libraries once they are created? How would that work? Is that part of the licensing? Right now it just is not worth the effort IMO and it is somewhat frustrating.
Can we just request libraries be created by you? For a fee of course. Maybe someone on fivr could do it.

Adding libraries will never be free (in term of efforts) since there is no standard existing, each of them has always a different approach to use.

I will surely keep on adding libraries but don’t think East West is in my radar. The issue of this is that to add libraries you must own them and this is an expensive business.
You surely could find someone but again he needs to own the library.

I have already added libraries on demand for a few composers, but as said I don’t want to go into the East West world

I agree with you about the prices. I am using the EastWest Composer Cloud as a way of cost saving.
So your position is understandable but, have you ever thought about approaching sample vendors for evaluation copies. Not that you would necessarily want to spend your time making review videos but it could benefit you as an influencer as well as help promote your products. Just a suggestion.
I’ve been working on adding libraries but presently it is an arduous task. Specifically, EastWest Hollywood choirs. I would say one or two hours to add a few tracks. I am hopeful that as I become more familiar with the process it will go a little faster.
I am keeping it modular as you suggest in the tutorials.
I am also trying to think through how one would go about sharing a library. What files would be required to add a modular library to the template with a minimum of fuss.
So I am looking forward to your new product. Hoping it is a top priority.

I am using EWHO as well, and I use BBC SO Core, not Professional. There are numerous Kontakt libraries I would like to add, Noire and Alicia’s Keys first among them.

For EastWest, the new Opus release consists of the following:

This may not be the tool for me at this time if I cannot quickly add libraries, as I think the first goal of any composer is to set up their own unique, personalized template easily for workflow purposes without having to learn java to do it.

Also, I was under the impression I could utilize BBC SO Core instead of Pro. Is this not the case? I wouldn’t be surprised if I was confused on this issue initially.

Yes BBCSO CORE will work. You just have some extra instrument tracks which can easily be removed.
I’ve been setting up the VEPro7 instances for EW Hollywood Opus. There are a lot of instrument Articulations. I’m thinking like 350 strings in all. So over a thousand for everything. I kind of decided to just go with the key switchers. I might do the longs and shorts someday. I’ll wait and see what the tool can do.

Hi Marco,
I have just upgraded from Lemur and got everything up an running. I am actually using my Raven as a 27" touch screen monitor which is great! I am about to embark on adding a lot of additional libraries that i use some Cinesamples / OT & esoteric Spitfire Samples. I have been watching your video and heard you reference Xmap. I am just wondering if you have a rough update on when/if this might be available.

I thought i would check before starting the unenviable task of adding multiple additional libraries.

Thanks Marco, and really enjoying Flow 2!

thanks for the feedback!
I am currently trying to find a solution to deploy it, but I cannot commit at the moment since I have not yet a solution ready

Safest is that you start building this yourself

Thanks for understanding
Marco

Some news here,
I am in the course of testing with one user a method to let you generate all programmatically, I will send more info soon
Actually I might need a second tester, will post it as soon as needed
thanks for the help in advance

Hi Marco,
Fantastic. I took your advice and added quite a few new libraries, once i got my head around everything it is much easier and clearer on Open Stage than Lemur.

If you need a second tester, happy to help!

Just wanted to see if there is any traction on Xmap for early next year?

Would love to help test if that’s a barrier.

Have a great holiday!
Best,
-Harry

I will surely need testers, so keep in touch

Hi,
Just wondering if there are any updates to this yet?